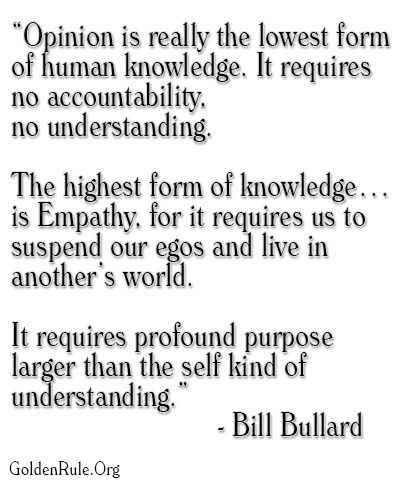 This second section is the core teaching of the COTGR.   This is a philosophy that we’ve been developing for many decades.   It’s the result of life-lessons, research, observation and testing.  A good bit of current and future GR scripture will center around stories demonstrating this second step, in action.

In this section, we’re going to discuss how to recognize and classify empathy in our every day lives.

We’re also going to explain why this is important and what this means to you personally, as well as how it can affect those around you, near and far.

Like every part of the world as well as this site and the doctrine herein, we are constantly evaluating and re-evaluating what we’ve learned and trying to improve things.  The ideas here are not written in stone, but they also are not arbitrary.

Lastly, we will discuss “the other side” of the Empathy world, and how people who fall on the darker side of the spectrum operate, and if they want to cross over, how that is possible.

Empathy is, at its essence, the ability to mentally put yourself in the existential position of someone else.   It’s commonly characterized by a mental thought along the lines of, “What would they think?” 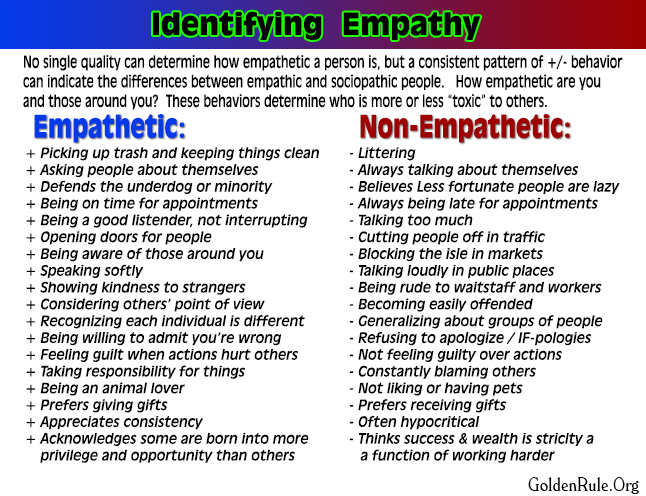 The video below is from the movie, “A Bronx Tale”.  It represents a great example of how to identify an empathetic person.  In the clip, the character Sonny advises the young Calogero on his first date with a woman he likes, to give her the “door test.”  He is to go around and open the door for her, keep his door locked, and when she gets in, see if she reaches over to unlock the door for him.  If so, she’s a keeper.  If not, dump her.”

In the above video Sonny characterizes the action of someone who doesn’t unlock the door as ‘selfish’.  That’s one way to describe it, but what’s really going on is a lack of empathy.  The ability to think of the other person and their needs is ever-present among empathetic people.  And how people react in a variety of normal, random scenarios can indicate how empathetic people are.  We will give you plenty of examples of how empathy (or lack-thereof) can be identified in every day behaviors.

The Paradox of Empathy

One interesting side-effect of empathy, is that since it mostly manifests itself in relation to one person dealing with another, it’s hard to monitor your own empathy level.  Empathy really only comes into play when two or more people interact — after all this is the recipe for empathy.  If nobody else is around, and you’re not making any decisions that relate to anybody other than yourself, you’re typically not exercising empathetic behavior in a way that can be easily qualified — there are exceptions to this, but in a general sense, empathy become “activated” when two or more people deal with each other (or interactive plans are made).

When you employ empathy, you “put yourself in someone else’s shoes.”  You try to imagine how they feel.  It’s almost always an observation that is based on some sort of event or scenario.

For example, Let’s say you’re at a party and there’s a joke going around your office.  You decide you want to share the joke.  But before you decide to say it, you ask yourself internally, “Is it possible this joke may offend one of these people?”  That’s the use of empathy.  Perhaps it’s an off-color joke and you’re not sure how certain people will react?  You choose to avoid telling the joke.

In contrast, let’s say you do decide to tell the joke.  You don’t think for a moment that the subject might offend someone nearby.  That action indicates a lack of empathy.  Or more appropriately one way in which we see empathy manifest itself: a lack of the effect of your behavior on others.

In the above two scenarios, the second one creates a negative situation.  You told a joke and alienated or offended somebody.  This could have been avoided had you thought of the audience a little more.

There are different ways in which empathy can manifest itself.  One of the most obvious and most important elements of empathetic behavior is called, “Empathetic Situational Awareness.”   We’ll call it, “ESA” for short.

In a traditional sense, situational awareness is fairly obvious and well known.  It means “being aware of what’s going on around you.”  It’s a key component of keeping yourself safe and comfortable.  Everybody has some degree of situational awareness.  More is usually better.  There are many obvious examples of this:  Looking both ways when crossing the street.  Looking for friends out in public that you can associate with.  Smelling your food before you eat it to make sure it’s fresh.  Driving for example, involves lots of constant situational awareness of what’s going on all around your vehicle.

But situational awareness can also extend into social areas.  Being aware of how people feel, and understanding their thought process and intent is a very useful form of situational awareness.  If someone is walking rapidly in your direction, depending upon how much you know about that person and what you read from their body language, can give you clues as to what’s going on, and how they might deal with you in the immediate future.   Are they looking at your or looking at something beyond you?  This tells you whether you are their focus or not – being aware of that means you know how to act, either evasively or defensively.  Perhaps you just need to step aside because they’re in a hurry to someplace beyond your position.  On the other hand, if you notice them looking right at you as they head your way, this can indicate something else.   Imagine if you weren’t paying attention at all?  At the least you might get in someone’s way; at the worst you could be attacked without getting a chance to defend yourself.

In any case, situational awareness if extremely helpful.

What’s also interesting is, if empathy and situational awareness is employed well, it’s usually not noticeable.    It’s when people fail at being empathetically, situationally aware, that their behavior becomes obvious.

Here’s a classic example that I’m often reminded of.   You’re at the grocery store.  You’re pushing a cart down the isle.  There is someone in front of you in the center of the isle.  One of two things happens.  Either they move out of the way, or they’re oblivious to your presence.   In the first situation, you hardly notice as it just appears to be a seamless move of two people around each other without any need for words or gestures.  In the second situation, you have to sit there and wait or interrupt them to remind them that there are other people in the store and they’re blocking the path.   It may seem like a somewhat trivial example, but situational awareness is pretty constant:  people either have it, or they don’t.   Some people are pathologically unaware of their “footprint” and others are inherently aware.  This goes straight to their level of empathy.

Because of this, one of the best ways of identifying empathy and working on being more empathetic is to recognize when there are failures.  This is also why it’s not easy or simple to know just how empathetic you are.  This isn’t something you know.  It’s what other people know about you.

Paying Attention To Others

Empathetic people are not only more attuned to other peoples’ feelings and situation, they are genuinely interested in others.  The key to recognizing true empathy is to identify when someone is interested in another person not because there’s something they want or need from them, but because they genuinely find them interesting, and worthy of knowing better.

Qualifying and Testing For Empathy and Why It’s Not Easy

Measuring empathy is like measuring “kindness.”  It’s not something a person can self-diagnose.  We are too jaded and biased in our personal perspective to be accurate in objectively calculating our level of empathy.    It’s like the saying, “If you want to know how good a friend you are, ask your friends.”

That being said, there are qualities that lend themselves to having more/less empathy.  Here are some examples:

Racism, bigotry, misogyny, etc., name calling is a sign of low empathy.  It’s part of the concept of marginalizing people by casting them into pre-selected groups.  You don’t have to “put yourself in someone else’s shoes” if you compartmentalize them into a group that already has an unsavory reputation.

Next:  How to cultivate empathy and have a more rewarding life.